Robert interview in The Guardian 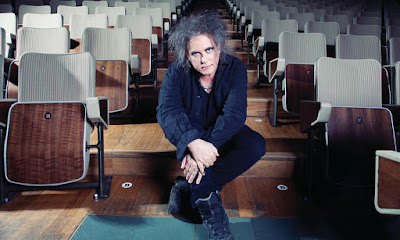 The Cure's Robert Smith: 'I was very optimistic when I was young – now I'm the opposite'

New interview in The Guardian. Some excerpts:

This year, the Cure are marking the 40th anniversary of their first concert under that name (they started in 1976 as Malice) with a flurry of activity. Smith has been rummaging through boxes for a documentary directed by regular collaborator Tim Pope. “I knew a few people wanted to – what’s a nice way of saying exploit? – celebrate the 40th anniversary with projects,” he says. “I said no, but I knew that they would probably go ahead anyway unless I made it very obvious that we were doing something.”

First up, Smith is curating the Meltdown festival at London’s Southbank Centre: a walloping 90 artists over 10 days. Smith will close the event under the name Cureation 25 – which promises a lineup of previous bandmates and more – shortly before the Cure headline a sold-out Hyde Park. “Meltdown’s going to be doom and gloom and Hyde Park’s going to be hands in the air,” he says. He sent a handwritten letter to each name on his wishlist and almost all of them said yes. It’s striking that everyone on the lineup, from the Manic Street Preachers to Mogwai, Nine Inch Nails to the Twilight Sad, has been influenced by the Cure in one way or another. Does Smith only like bands who like the Cure?

“I think you’d be hard-pressed to find many artists who don’t like the Cure,” he says. “I think people admire us, even if they don’t particularly get the music. It sounds very conceited, but it’s not about me, it’s about the band. We’ve stayed true to ourselves. If you’re in a band, you realise how hard that is. I think people admire our tenacity.”

The Cure’s position is certainly enviable: loved with cult-like fervour yet mainstream enough to be covered by Adele (Lovesong) and featured in Ant-Man (Plainsong). There’s even a Reese Witherspoon romcom named after their 1987 hit Just Like Heaven, not that Smith has seen it. They are the only band, Smith notes, who are routinely perceived as both suicidal and whimsical. And they have maintained their integrity. Currently without a record label, manager or publicist, they tour (often) or record (not so much) only when Smith feels like it. It’s not true that he’s the only Cure member who matters (if bassist Simon Gallup left, then “it wouldn’t be called the Cure”), but he has always been in the driving seat. When was the last time he did something he didn’t want to do? He points at my Dictaphone and laughs. “Sitting here.”

These days, the Cure are predominately a live act, renowned for their epic, multi-encore shows. In Mexico City, as a 53rd-birthday treat, Smith tried to break Bruce Springsteen’s record of 4hr 6min, but miscalculated and fell three minutes short. “I was a bit crushed,” he says, “because we could have honestly kept going for another half an hour.” Friends, bandmates and critics have all suggested he leave the audience wanting more, but he keeps going because he enjoys it so much, and because he thinks he owes it to the fans. “I still think of that person who’s there thinking, ‘I wish they wouldn’t stop. I wish they wouldn’t stop.’” Hyde Park, he warns (or promises), will be a relatively brisk two hours.

It has been a decade since the last Cure album, 4:13 Dream. “I’ve hardly written any words since then,” Smith says glumly. “I think there’s only so many times you can sing certain emotions. I have tried to write songs about something other than how I felt but they’re dry, they’re intellectual, and that’s not me.” He wistfully quotes a line from the Cure’s The Last Day of Summer: “It used to be to so easy.” Would he be disappointed if he never made another album? “I would now, yeah. Because I’ve committed myself to going into the studio and creating songs for the band, which I haven’t done for 10 years. Meltdown has inspired me to do something new because I’m listening to new bands. I’m enthused by their enthusiasm. So if it doesn’t work, I’ll be pretty upset, because it will mean that the songs aren’t good enough.”
Advertisement

He has been revisiting old unused lyrics to see if he can repurpose any, but “some of them don’t make any sense to me any more. It would be weird if I felt the same as I did when I was in my 20s. I’d be mental!”

How has his outlook changed? “It’s slightly more cynical and slightly less optimistic, which is strange. I was very optimistic when I was young, even though I wrote very dismal songs, but now I’m kind of the opposite. I have a very dismal outlook on life.”

Smith worries that, at 59, he has become a reactionary who scorns social media, smartphones and the like. “I’m at war with a lot of the modern world,” he says. “I really hate how things have ended up in the last 20 years. I don’t know how it’s happened. There’s a certain tone to this country that’s really changed for the worse.” He’s building a rant, but a melancholy one. “It’s weird how the 70s is often referred to as a period of great unrest and the three-day week, blah, blah. It’s bollocks. The period from the second world war to the 70s, we were on a great trajectory for equality and so forth. It’s only since the end of the 70s, Maggie and Ronnie, that things have inexorably gone wrong. It’s insane, people’s lust for technology and new things.” He sighs. “I’m just turning into a grumpy old man.”

Smith is feeling his age in other ways. He notes that Tom Petty’s last UK show before his death last year was also a 40th-anniversary concert in Hyde Park. “Last time we sold out places in America that we’d never sold out, even in the 80s,” he says. “A darker part of me thinks they like watching us because they think I’m going to fall over and they’re not going to get to see us again.” He shakes off the joke. “I’m just being silly. It will stop, of course it will. I do wake up on a day like today and think, ‘Am I really talking about this band, still?’ I’m honestly astonished at how much love there is for the band. If you’d told me when we started, I would have been quite shocked.” One more encore, then. Maybe two.
Posted by Craig at 7:05 AM