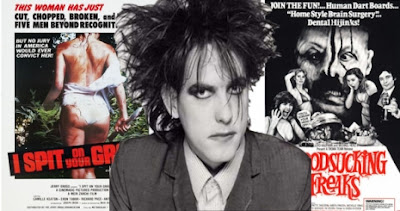 "In a recently unearthed 25-year-old fax to Elektra Records’ Howard Thompson, The Cure’s Robert Smith makes the “urgent” plea for a stack of awesomely-gory horror and exploitation VHS tapes.

Smith, who had planned to go shopping for movies in New York City, found himself without a day off when an extra show was added to their tour (believed to be the 1992 tour based on the dates and font on the fax). To make up for lost shopping time, he had a fax sent to Elektra asking for A Clockwork Orange, Driller Killer, I Spit on Your Grave, Last House on the Left, Bloodsucking Freaks, Filthy Rich, Faster Pussycat! Kill!... Kill! and “maybe a couple of others you could recommend in the splatter-cannibal she-devil vein.” These movies would have been unavailable in England at the time due to Parliament passing the Video Recordings Act of 1984.

Smith had excellent taste in sleaze.

Former Elektra Records head of A&R, Howard Thompson, posted the old fax to his Instagram account, so it does appear to be authentic."